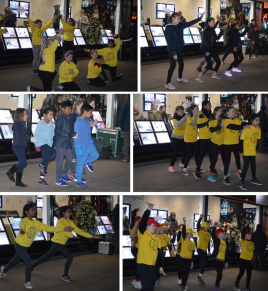 Congratulations to all who performed at the Pinner Pantomime evening. Although it was freezing cold, you did brilliantly! We are very proud of you. 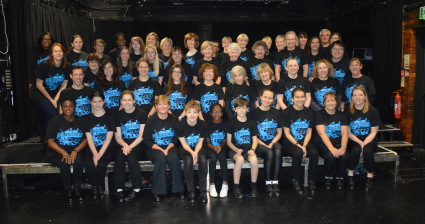 TAPATHON 2017 this year involved 7,518 tappers!!! What an incredible achievement for us all — every year we are improving on the previous year's numbers. We fell short of the record by just 78 people.

Each year, thousands of tap dancers come together all over the UK, each one determined to smash the record. It's all in support of a great cause (BBC Children in Need) and this year the event raised in excess of £38,600. Harrow Theatre Dance and Pinner Theatre Dance raised an additional £80 through our cake sale.

And save the date for TAPATHON 2018: Sunday 18th November. We're going to get this record broken! 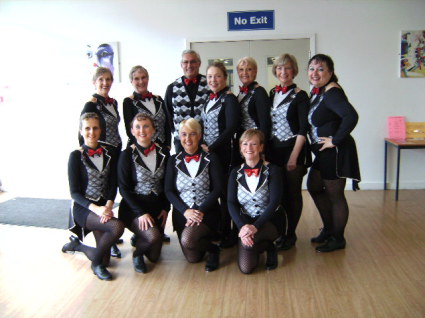 Adult tap festival group- Well done on another great year. We came back with 2 trophies and a score  of 100 marks for  the Ealing festival!

Another successful choreography competition was held on Sunday 2nd April. The students choreographed their own routines and performed them in front of an audience. Our adjudictor, Mary Vaughan (the founder of Pinner Theatre Dance) awarded trophies and medals to the winners. Well done everyone! 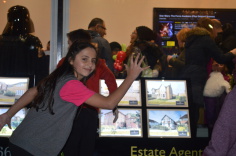 On 24th November, many of our groups performed for Pinner Pantomime evening. Congratulations to everyone- you all looked great! 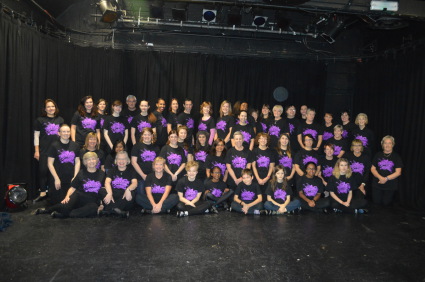 Tapathon 2016 - On Sunday 20th November, we attempted to beat the world record for the largest tap dance. We were even closer this year to breaking the record, so we are very excited about trying again next year. We raised an additional £90 for Children in Need through our cake sale. 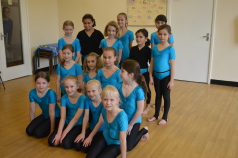 Our grade 2 modern class represented the school for the Cannon Lane 60th Anniversary celebrations on 5th November. They performed beautifully! Well done to you all! 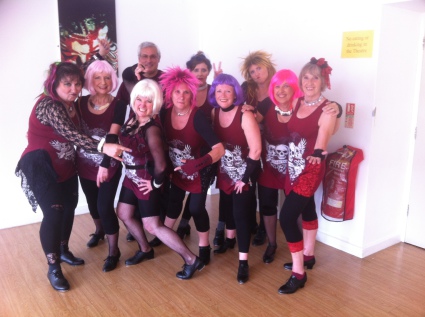 Another great year for the Festival group- rocking out ot a Queen Medley! 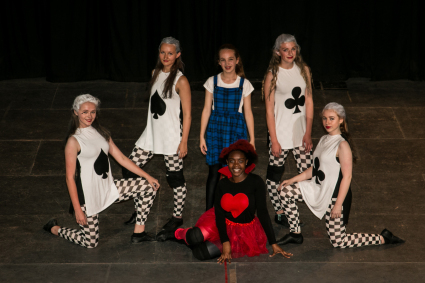 On Saturday 9th July, the whole school performed at Hatch End High School for our show. Everyone was very excited and the audience were impressed by the talent our students displayed. The proceeds of the show (plus a few generous donations) totalled £725 which was donated to Great Ormond Street Hospital. Well done to everyone involved!

(For more photos check out the Dance class pages, courtesy of sadiejanephotography) 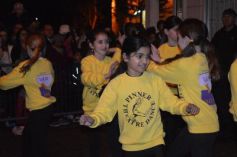 On Thursday 26th November 2015, students from Pinner Theatre Dance performed for Pinner Pantomime evening. Here are a few photos of our fantastic performers! 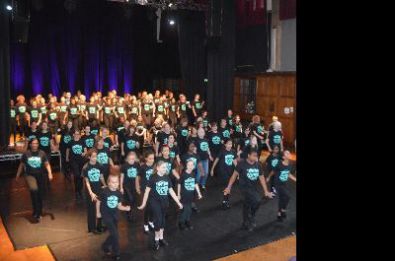 On Sunday 15th November, 2015, students from Pinner Theatre Dance participated in the annual Tapathon. We are hoping to have broken the record for 'the largest tap dance in multiple venues'- Fingers crossed!

We also raised £145 for Children In Need through a cake stall. Thank you to all who made cakes and those who bought and ate them! 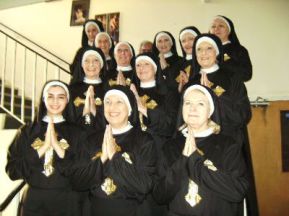 ANOTHER WIN FOR THE ADULT TAP FESTIVAL GROUP. Receiving high marks for both the Ealing and Croydon dance festival. The adult tap festival group celebrate 1st place in both competitions. Well done! 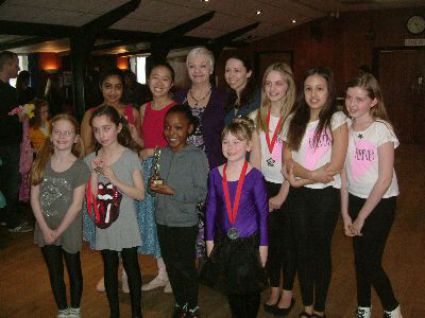 There were 17 entries on the day, split into a Junior and Senior section. The students had to choose music and choreography their own routines to be performed in front of an adjudicator. We were very honoured to have the founder of Pinner Theatre Dance be our adjudicator who chose a 1st and 2nd place winners for each section. There was also a prize for an individual whose performance particularly stood out.

Over 40 students performed at Pinner Pantomime evening, on 27th November 2014. Here are a few shots from the night. 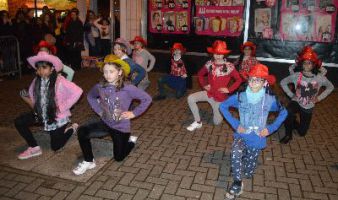 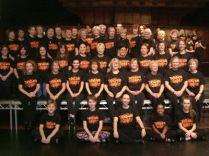 TAPATHON 2014 On 16th November 2014, 45 students from PTD joined with others across the country to break the world record for the largest tap dance and raise money for Children in Need. We had to perform an 8 minute routine to the song 'Happy' starting promptly at 1.00pm. Although exhausting, it was a great day. We raised an additional £120 through a cake sale for the charity JDRF, supporting those suffering from type 1 diabetes. Thank you to all who made cakes and to those who bought and ate them!

We are honoured to have received an invitation to perform at the above event. The theme will be Battle of Britain and RAF Northolt Heritage. They are planning to have aircraft ranging from the Spitfire to the modern day Typhoon. It will be a fantastic event and many of our classes are busy rehearsing their routines. Please see http://www.raf.mod.uk/rafnortholt/events/index.cfm for details. 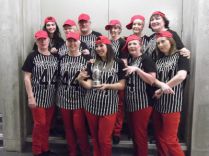 ADULT TAP FESTIVAL TEAM WINS EALING FESTIVAL COMPETITIONThe team continued with their unbeaten run by winning Ealing Festival on 16 April 2014 and achieved a Distinction with 87 marks to bring back the trophy once again. Well done team!

Our Street crew performed at this event on 30 June 2013 which is Harrow's biggest annual celebration of culture. They smashed it!!! The crew hugely impressed the crowd and the organisers with their energetic performance. We're proud of you! Check out the video on YouTube. Under One Sky

We were thrilled to welcome Jason back again to the school on the 2nd February for the second of two recent masterclasses. We all had great fun learning 'I've Got Rhythm' from the show 'Crazy For You'. His theatre credits include '42nd Street' at Theatre Royal Drury Lane, 'Ziegfeld' at the London Palladium, 'Anything Goes' at the Prince Edward Theatre. 'Me & My Girl' at the Adelphi and 'Crazy For You' again at the Prince Edward. 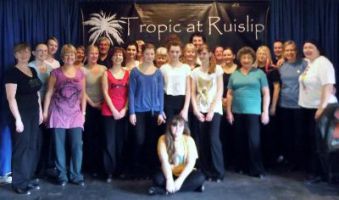 Some of our adult and senior tappers pictured during a much needed break! It was hard work but great fun! 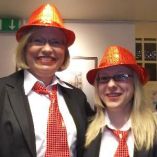 Many congratulations to Anneliese Taylor and Helen Haile from our Adult Tap Competition Group who both performed in the highly acclaimed London 2012 Olympics Opening Ceremony.

Also many congratulations to Linda Pullan from our Adult Tap Competition Group who was selected to dance in the London 2012 Paralympics Closing Ceremony.

Pupils perform in show with Stars from Strictly Come Dancing

Six of our dancers appeared in 'An Evening with the Stars of Strictly' at The Alban Arena, St. Albans on 3rd April with Pasha Kovalev and Katya Virshilas. This was a fantastic experience for them. They worked really hard and put in a very professional performance. Well done to Marta Micallef, India Titeux, Helen Ford, Naomi Gunasekara, Yume Watanabe and Shreena Lee. 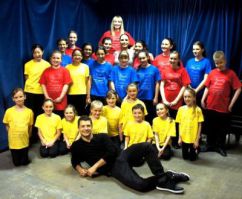 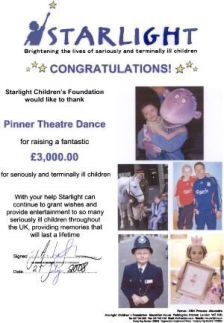 235 of our dancers raised £3000 and a cheque was presented to a representative of Starlight Children's Foundation, which grants wishes to seriously ill children.

The adults and children alike all had a ball and the party atmosphere both on stage and in the auditorium was terrific!

Kirsty taught two masterclasses, one for adults and one for students aged 12 and over, at Pinner Theatre Dance on 1st December. All those who attended had a fantastic time learning the opening number from 42nd Street and thoroughly enjoyed performing the routine in our 'Let's Party!' production in July (with kind permission - choreography by Gower Champion). 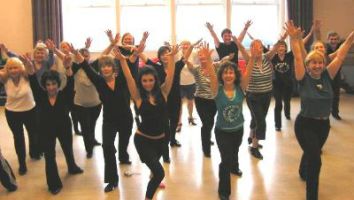 The adults exhausted but smiling, pictured with Kirsty and Susanna at the end of their tap masterclass.

The Magic of the Movies Show 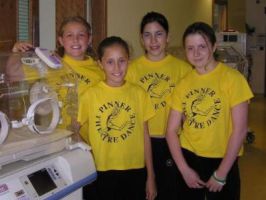 The full-scale show held at the James Theatre, Watford was a fantastic success and was performed to packed audiences on Friday 25th and two shows on Saturday 26th February. £3200 was raised for the Neo Natal Unit at Northwick Park Hospital.

The last class of term is Saturday 26th March.

If you have any queries or wish to book a  trial, please contact us:

Get social with us.